On Wednesday, June 5th 2019, ISH Music Department hosted the ISH Choir Extravaganza. This was a joint concert with all the choirs from Primary and Secondary and ISH staff choir, along with ISH staff band a.k.a TINT (Teachers In Need of Talent). They all showcased their musical talents in some spectacular performances. The event was supported by Musicians Without Borders, with the appearance of Ms Kort from the organization that evening.

We received a lot of donations from the audience in the event and the 140 Euros collected were donated to Musicians Without Borders and the ISH Music Department. Thank you to everyone who donated, it was very much appreciated. Furthermore, a huge thank you to all the performers, the audience, ISH ICT Department, the Concierge and Communication Team as well as Musicians Without Borders who all helped make this a wonderful concert. 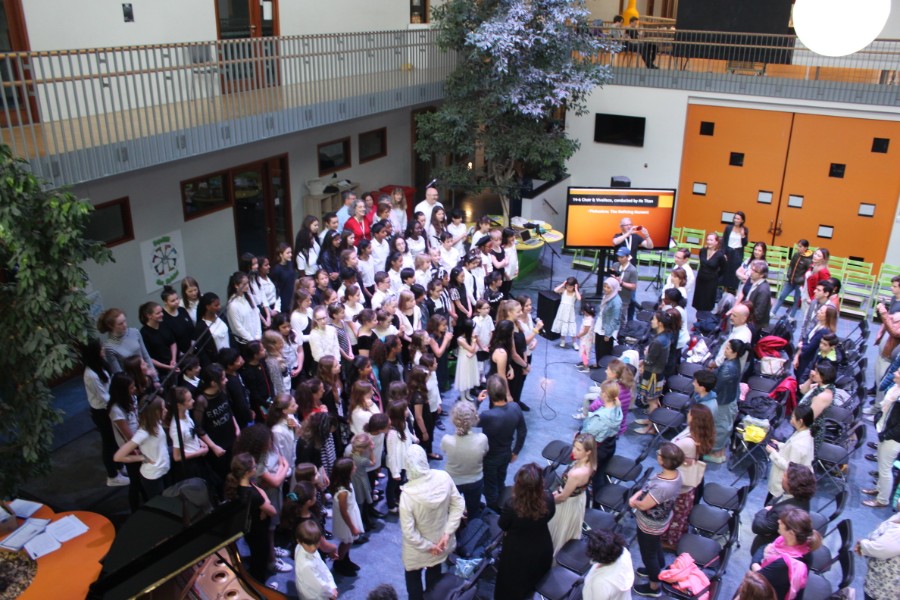 Some appreciative feedback from performers at the event -

"The choir extravaganza was a really great event. It really allowed students in different choirs to see what the other choirs were like and what kind of songs they sing. It also allowed us to work with others, such as GLEE club or the primary 4-6 choir. As well as this, it also allowed the Year 6 students to see what VivaVoce was like and informed them of a choir they could join next year. It gave Senior VivaVoce the opportunity to work on many songs for this concert that we hope others enjoyed. Overall it was a really fun evening." - Senior VivaVoce - ISH Y11 Robyn Brooke

"The choir extravaganza was a very enjoyable event which allowed us as different choirs to join in and be able to sing together. It helped us understand how well we could adapt with new people. During practices, we collaborated with the staff choir and helped each other with our difficulties. Overall, I think it was a very supportive environment with the others and we enjoyed!" - Junior VivaVoce - ISH Y9 Tanishka Majukar

"Being on stage with Glee Club as well as singing with all the other choirs involved was a wonderful experience for me. The Choir Extravaganza was a great opportunity for everyone, both staff and students, to show off their skills and show our family and friends what we had been working on over the course of the year. On behalf of Glee Club, I would like to say thank you to everyone involved in organizing the ISH Choir extravaganza and making it such an enjoyable event for us and hopefully everyone else!" - Glee Club - ISH Y10 Pleun Uijttewaal

"The choir extravaganza was very interesting. Many hairspray songs were fun, and so was seeing what all the other ISH musical team had accomplished. Out of the selection of primary songs I most enjoyed singing defining moment with Junior and Senior Viva Voce." - Primary Choir - ISH Y6 Robbie Pope

"I thoroughly enjoyed being part of the experience. A little nervous being interviewed and then ‘on-stage’. However, it all went well and The Staff Choir did a great job. I love singing and it was super to see the love of singing from so many people, from children to adults, pupils to staff. Thanks to the organisers, it was a great event " - Staff Choir - Mr McCarthy

"This was the second time we performed at the extravaganza, but this time we were invited to play a few of our songs during the mingling after the main performances. After a short interview, we kicked off and had the crowd rocking...well not really, but we had a few of the younger students perform a few good moves at the end of our set. We really enjoyed this opportunity to show our ‘talent’ and received a lot of positive feedback from the audience. Thank you Ms Titan, Mr Goldwasser and Ms Ogusu for organising this very successful event and we are looking forward to contributing in the future" - Staff Band TINT - Mr Brouwers