Welcome to the Student Wellbeing Department.

We are receiving a lot of questions about how to manage the current COVID-19 situation. We have put together some resources for staff, parent's and student's.

The resources are available on the intranet pages shared below:

If you have a question that not on here, please email us on studentwellbeing@ishthehague.nl and we'll answer it for you as soon as possible.

We'll be updating this page regularly with answers to your questions, so please keep checking back here for updates.

Remember, what we are experiencing now has never happened before, so it's OK that it's difficult.  Don't push yourself too hard.... 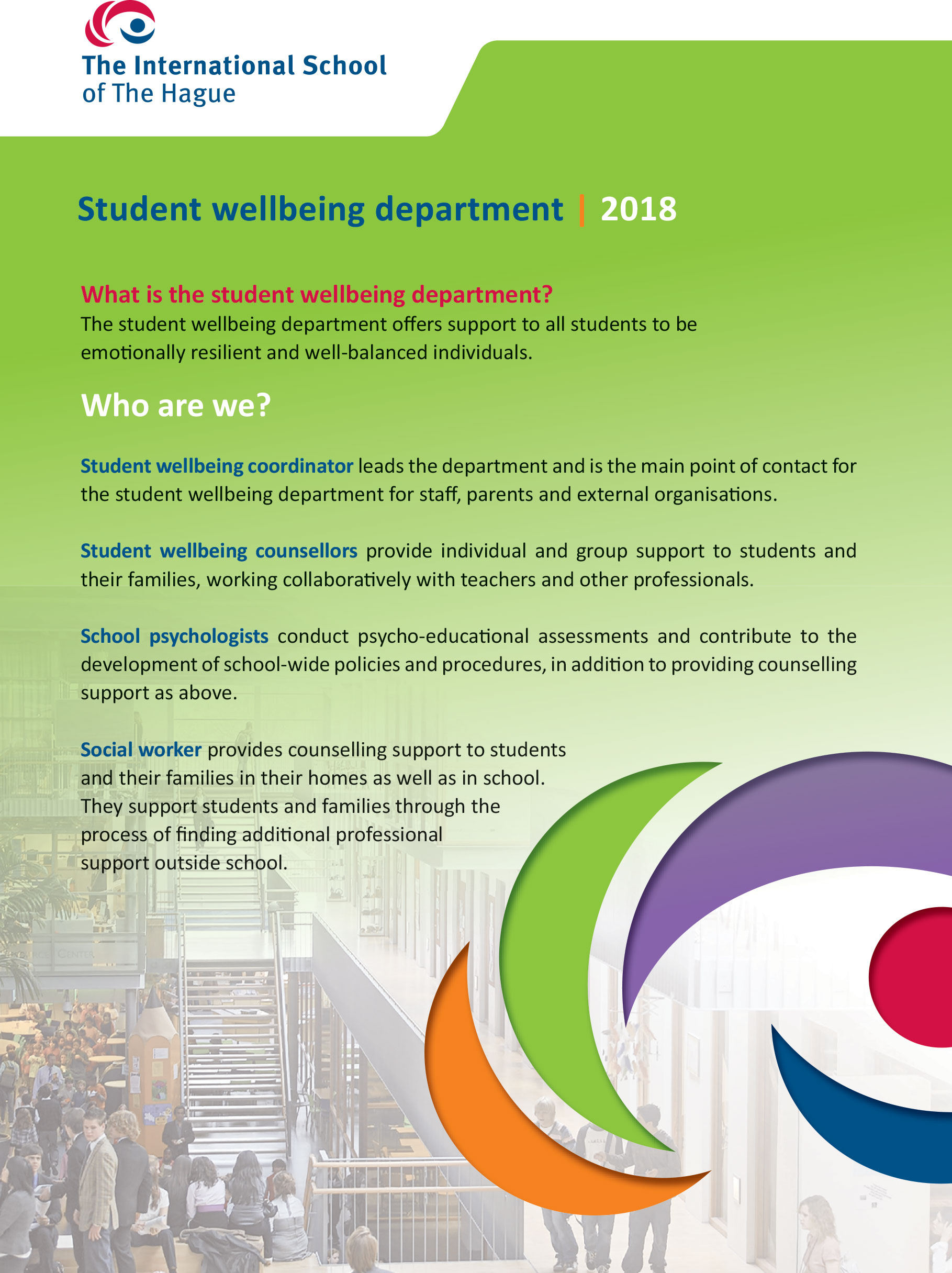 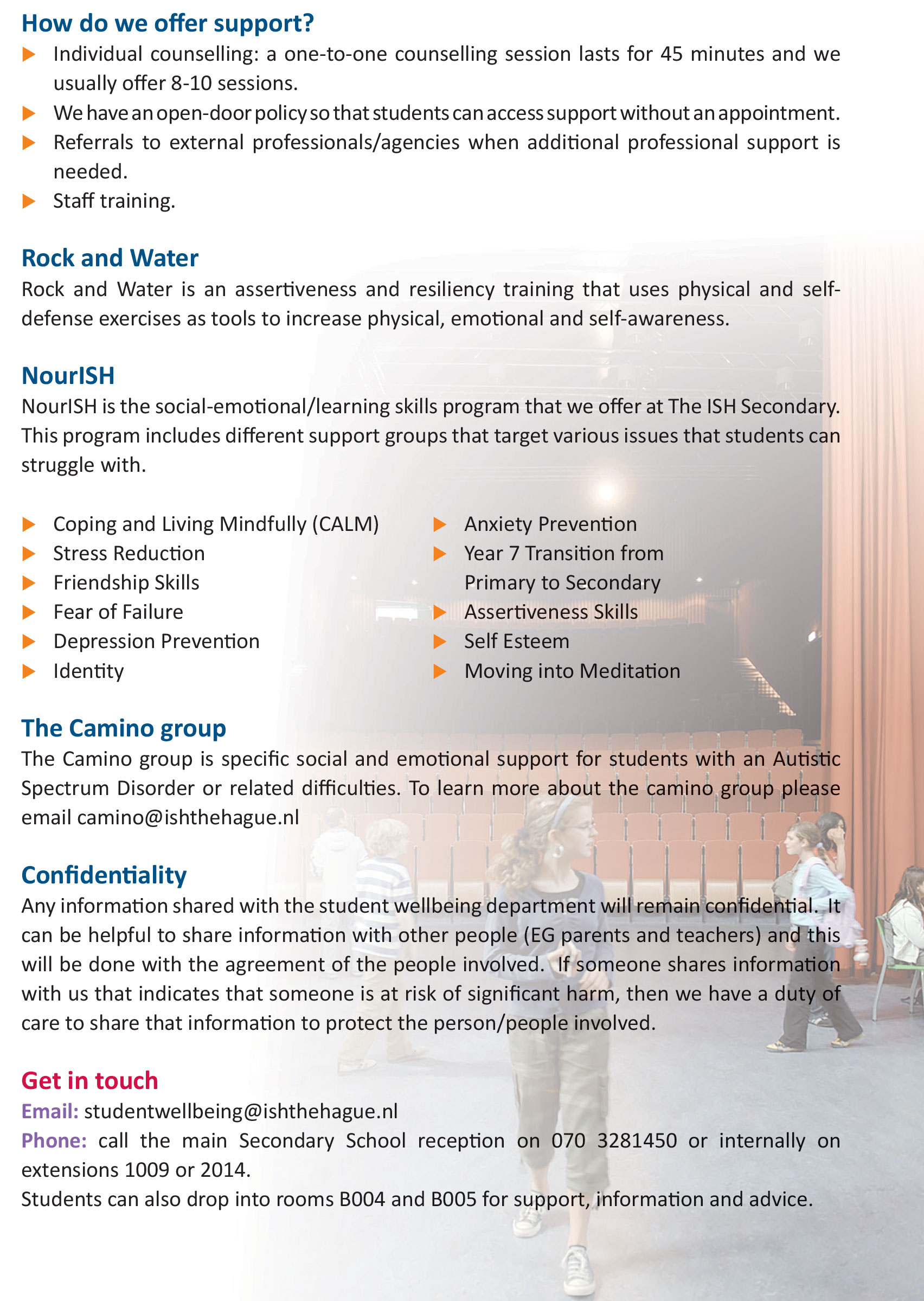 The Health Office of the International School of The Hague (ISH) aims to foster a safe and healthy environment conducive to students’ learning and growing while at ISH. The office is comprised of four qualified, experienced nurses who serve the health care needs of both the Primary and Secondary Schools, staff included. The Health Office is open for any medical concerns, injuries/accidents, illnesses, and consultations. This includes intervention for minor injuries or illnesses and referral to the health care community for more urgent or serious health concerns.

Students, Staff, and Parents should always feel welcome to contact or come to the Health Officers to discuss concerns or questions related to medical issues, safety, and general health.

FlourISH is the driving force behind the Pastoral and Mentor Program for Years 7-11 (MYP) and – as of August 2016 – for Years 12-13 (DP). It is neither a concept nor a topic, but a way of life; the main aim is to achieve the full well being of our students. FlourISH relies on the assumption that “children and youth have inner strengths and gifts that support their capacity to initiate, direct, and sustain positive life directions” (Hamilton & Hamilton, 2004; Losierand Morrison, 2007).

FlourISH is a social and emotional programme as well as a physical wellâbeing program, designed both to promote wellâbeing through the development of character strengths and to recognize the importance of physical health to our psychological wellâbeing, built on the insights of positive psychology – inspired in particular by the works of the famous psychologist Martin Seligman. Through the FlourISH programme, students are encouraged to increase their set of values and behave accordingly in order to flourish as individuals beyond their academic life. FlourISH promotes a positive approach to potential issues that students may be faced with, such as bullying and making responsible choices regarding their own health, as well as aiming to consolidate study and organisational skills.

FlourISH was launched in September 2013 by a group of committed and enthusiastic members of the ISH community and it replaced the traditional PSHE or Mentor programme. Since then, all the mentors at the ISH have been delivering the programme during the scheduled mentor hours and guiding students towards a meaningful and healthy life based on 5 Key Values also knows as MERPA:

Especially in Years 10-11, FlourISH is equally a creative and critical thinking programme, designed to help students embrace the contestability of ethical values which may be provisional and constructed in various ways. This is an equally crucial component of the programme. It supports character development through the critical approach to (normative) values that may be addressed in the other components of the programme. In addition, it supports the students in their approach to the academic curriculum (e.g. assessing arguments and structuring valid arguments) and the world around them (e.g. critical evaluation of the abundance of information provided by the various media, ethical decision-making etc.).

In Years 12-13, FlourISH will be integrated in the already existing mentor programme. There will be a bigger emphasis on Time Management, Organisational Skills, Mindfulness and Career Orientation, as well as a focus on global and digital citizenship.

By focusing on the development of character strengths, the importance of physical health to our psychological well-being, the importance of perspective, the development of critical thinking, the contestability of values and the awareness that there may be multiple ways of solving problems, the Flourish programme is key to helping students develop the attributes that are part of the IB learner profile and, more generally, to promoting international mindedness.

The key people developing and coordinating the FlourISH programme are: